One of the things theatre can do is give people a voice. Sometimes it’s a historical situation that can be re-examined after the event with fresh eyes. Sometimes it’s something right under our noses that is either silenced, or we lack the curiosity to find out about.

‘Polyvocal’ is the technical term for what Fionnuala Kennedy has achieved with her new play Removed: creating together one fictional story by weaving together elements of testimony from lots of real people so we hear the voices of lots of different children who have experience of Northern Ireland’s care system.


“You have to grow up quickly in care – you’ve no choice.”

Adam was nine when he and his little brother left their Mum’s house with a few possessions in a black bin bag. He rhymes off a list of social workers that sounds like the team sheet for a football match with a bench full of subs.

Actor Conor J Maguire sits on a bench and describes Adam’s childhood journey through a succession of foster families, schools and vices. Dressed in a sports top and jeans, he’s got a winsome smile which conveys hope to the audience, much needed given that most of us have begun to sniffle by about 20 minutes into the hour-long performance.

Director Emma Jordan keeps him calm and controlled for the most part, letting the script transfer the emotion across into the hearts of those seated in front of him. I’m shocked and upset and angry. And then Adam stands up and in a moment his frustration escapes and I hear his pain expressed. Delivering the monologue with such consistent audience engagement and steel is a remarkably capable performance from Maguire, a young actor making his professional stage debut.

While Adam isn’t real, and realistically, his story is a little sanitised when compared with some of those that would have been captured, it communicates the resilience of young people who suffer a system that is meant to support them but so often doesn’t.

The observations, the small details – the beans dripping down a girl’s arm – are splendid and paint a rich picture. There are incredibly funny moments amongst the pathos. Fionnuala Kennedy’s heart for social justice shines through, even more strongly than her 2017 play Entitled. 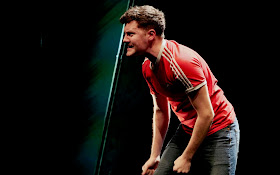 Despite the absence of props, it’s like we’re in the room watching the crazy antics unfold in the care home. While Conor Mitchell’s soundscape adds low frequency atmosphere and snippets of conversation and room noise, behind Adam, Conan McIvor’s sympathetic imagery is gently painted onto the polyhedrons of Ciaran Bagnall’s set which frames the simple bench around which the conversation is delivered.

The interviews on which the script was based were facilitated by VOYPIC (Voice Of Young People In Care) which was set up 25 years ago by young people to promote the rights and improve the lives and outcomes for children and young people in care. The latest official statistics report that this time last year, 3,109 children were in care in Northern Ireland, the highest number recorded since the introduction of the Children (Northern Ireland) Order 1995. Four fifths were in foster care placements.

Belfast Children’s Festival believes that every child should have the right to access exciting and original creative experiences, regardless of who they are or where they come from. Placing Removed in their programme, the festival has also shown that everyone’s story deserves to be told. I can only hope that this play will help the voice of young people in care to be heard more widely, within the social care sector and beyond, and that black bin bags, irascible police, and any unfeeling social workers will be consigned to the past in a system that chooses to put living, breathing children at the heart of its mission.

Prime Cut’s Removed is a moving piece of theatre that plays in the Brian Friel Theatre at the back of Queen’s Film Theatre until Saturday 16 March. It’s the best thing I’ve seen in the theatre in the first ten weeks of 2019.

Check out other Belfast Children’s Festival shows in my preview.