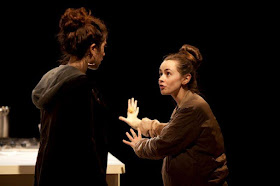 Suspend your disbelief for 75 minutes (and the interval) and step into Don McCamphill’s imaginary parallel universe of west Belfast where left-wing theories are being lived out in the Kennedy Centre where the financially marginalised shoppers are claiming the contents of supermarket shelves as their own without payment as a protest against high prices. And this popular uprising might be spreading to public transport too.

Adapted from Dario Fo’s original Italian 1974 play Non Si Paga! Non Si Paga! into Irish as Ní Thig Linn Íoc! Ní Iocfaidh Muid! (Can’t Pay Won’t Pay!), the cast of five bring to life a fantastical world of phantom pregnancies, hirsute clone policemen and a wardrobe to hide in that could have been borrowed from Narnia. There’s simultaneous English translation through headsets at every performance. 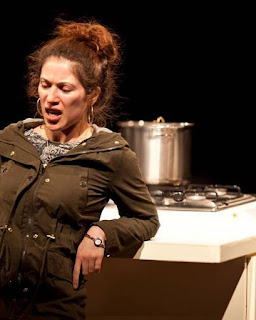 Aíne (played by Aoife Ni Ardghail) has been struggling to manage the household finances. With barely two pennies to rub together, not every bill has been paid but Jonty (Tony Devlin) doesn’t realise just how dark the fiscal clouds are that gather over their flat.

Margherita (Eleanor O’Brien) and Cricky (Jamie Hallahan) are Aíne and Jonty’s mates and partners in crime. They’d do anything for their friends, and don’t stop for long to consider the ramifications of the deceitful japes they get caught up in.

Ni Ardghail plays Aíne as a quick-witted and quick-worded woman whose imagination runs faster than a car freewheeling down Craigantlet hill. She could talk Margherita into anything. O’Brien quietly steals scenes with her comic contractions and labour drama. True to form Devlin breaks into song at every opportunity. Multi-roled Jack Walsh exploits his minimal costume changes for laughs as he switches characters, appearing more than once in many scenes.

With a simple set consisting of a kitchen island unit, a sofa, a door, a window and the aforementioned wardrobe, director Brid Ó Gallchoir allows the cast to chew the linoleum by doing laps around the kitchen as they mull over the moral and pecuniary dilemmas they face. The audience sit on all four sides of the stage. Physical tricks add to the subtle mirth and sense of the extraordinary alongside the critique of capitalism and the radical left socialist response. 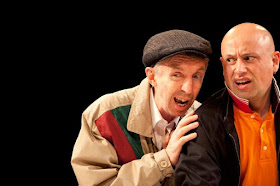 Aisling Ghéar celebrated their twentieth anniversary of producing Irish language theatre this year. With this performance, the company once again show that they are not afraid to produce original work that stands out in the busy local theatre scene.

Listening to the play in translation through headphones ever so slightly disconnects the acting from the dialogue – at times, it’s like watching a perceptibly out of sync video – and while most of the humour comes across, the loss of immediacy decreases its power.

While the play avoids going full farce until the final scene, it is full of surprises and crazy ideas that grow legs. Can’t Pay Won’t Pay is a gentler-than-expected cry against the state, against banks, against politics and against the strong arm of the law encouraging the “enslaved masses to stand up” as the cast sing at the show’s conclusion.